Photographing this stunning wedding in Cortijo Rosa Blanca was such a great experience! Not only the venue is fantastic but the couple Steph and Tom were a dream couple to work with 🙂

Steph and Tom first met in their first few months at university bumping into each other around their halls of residence. 11 years later, just before Christmas, Tom proposed to the love of his life! He organised a day away in a surprise place! They drove back up to Newcastle where they had first met and proposed in one of their favourite spots which was holding so many amazing memories for them! How romantic is that?

So how come they decided to get married in Spain? Well… they are big travellers! They have beed to so many places always curious of new adventures, new places, new tastes, people… Getting married abroad was simply a natural step for them and when they first came to Spain and saw Cortijo Rosa Blanca they instantly fell in love with it! It was the perfect setting, all they ever imagined for their wedding venue to look like!

Stephanie and Thomas wanted to keep the decor quite simple as she simply didn’t want to interfere with the beautiful surroundings. They went for greenery for the centrepieces and hanging up in the ceremony arch along with hints of brushed gold. They also went for a non traditional wedding cake that proved to be one of their favourite things in the wedding decor:) It was a wedding cake of cheese! It tasted amazing and looked amazing. Instead of a traditional wedding cake topper they asked for an olive branch to be made into the shape of a heart!  They also decided to make the name tags by hand and doubled them up as wedding favours! Brilliant!

Stephanie walked down the aisle accompanied by the tunes played by their Spanish guitarist. It was one of the most anticipated moments of the day for both of them. Both of them seeing each other for the first time that day was indeed a very emotional moment. The ceremony performed by Natasha was so lovely and personal. They both wrote their vows and had most of the guests in tears..

They were both so happy on their wedding day! They said themselves they were both on cloud9! They day was just perfect and exactly how they imagined it to be.

I hope that the photos will let you feel the atmosphere of the day and the most amazing moments that happened in this wonderful wedding in Cortijo Rosa Blanca.

You can see another amazing wedding from Cortijo Rosa Blanca here !

This site uses Akismet to reduce spam. Learn how your comment data is processed. 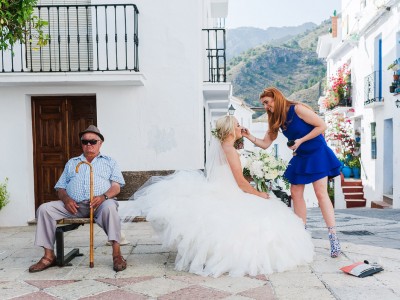 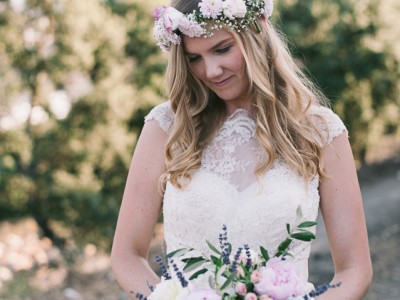 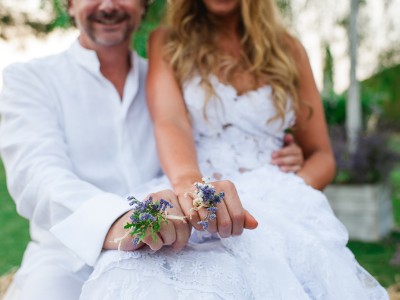 Prev Mother’s Day Mini Sessions.
Next Wedding in Monasterio de San Martin.
error: Content is protected !!
We use cookies to ensure that we give you the best experience on our website. If you continue to use this site we will assume that you are happy with it.Ok